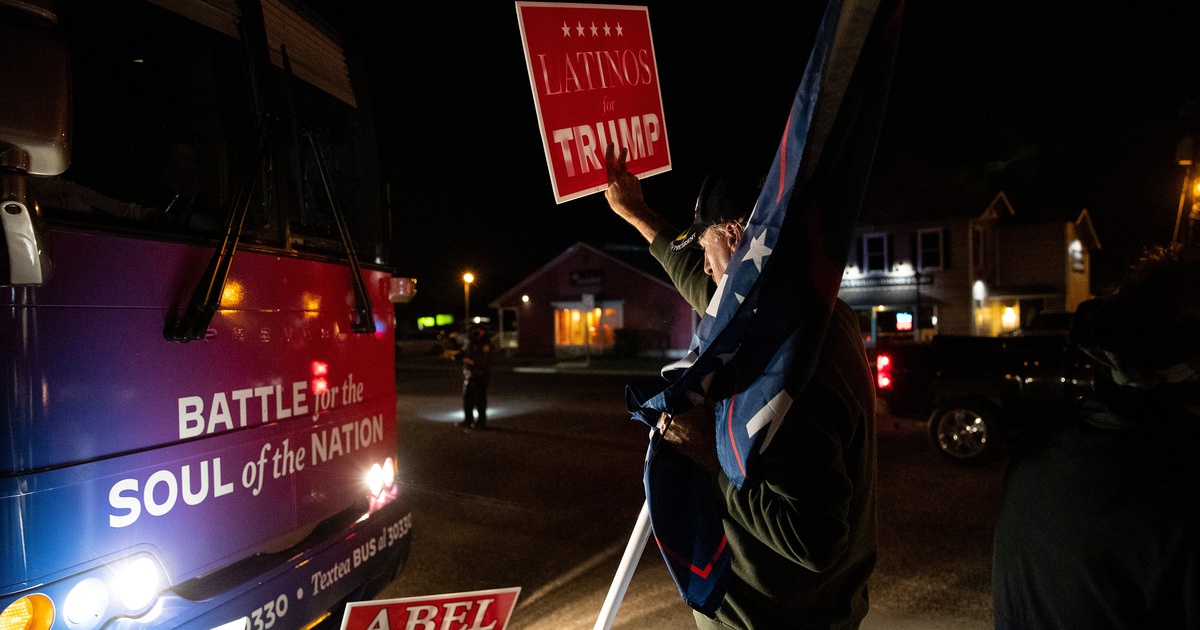 Former state Sen. Wendy Davis and others who were traveling on a campaign bus for President Joe Biden last fall when it was surrounded and followed by former President Donald Trump’s supporters on a Texas highway have filed multiple lawsuits over the events that transpired that day. The suits target people who were allegedly following and harassing the bus, as well as local law enforcement for not helping after assistance was requested, according to those on the bus.

The lawsuit filed in federal court Thursday against at least seven members of the so-called "Trump Train," who followed the bus, claims the group violated the Ku Klux Klan Act of 1871 and Texas law by organizing a "politically-motivated conspiracy to disrupt the campaign and intimidate its supporters."

The Klan Act prevents groups from joining together to obstruct free and fair federal elections by intimidating and injuring voters, or denying them the ability to engage in political speech.

The second lawsuit was filed against law enforcement who "turned a blind eye to the attack — despite pleas for help — and failed to provide the bus a police escort," according to Protect Democracy, the group of lawyers representing the plaintiffs. The second lawsuit was filed against Chase Stapp, the head of San Marcos’ director of public safety, and the San Marcos City Marshal's Department.

The lawsuit against the Trump supporters claims the defendants violated that law when they followed the bus, yelling death threats and streaming their activities on social media and "bragging about their aggressive driving."

The plaintiffs in both suits include Davis, David Gins, a then-campaign staffer who now serves as deputy director for operations for Vice President Kamala Harris, Eric Cervini, another campaign volunteer, and the bus driver, Timothy Holloway. The lawsuit also states that the plaintiffs continue to suffer psychological and emotional injury from the event. The bus driver, Holloway, has been unable to drive a bus following the experience.

"Not knowing whether the police would show up to help us was terrifying," said Holloway in a press conference Thursday afternoon.

They are asking for compensatory, and punitive damages and for legal fees to be covered in both lawsuits.

"What Defendants cannot do under the law is use force, intimidation, or threats against those with whom they disagree politically. Yet that is precisely what Defendants did by conspiring to use their vehicles as weapons to interfere with the constitutional rights of those who supported the Biden-Harris Campaign," the lawsuit reads. "The Constitution’s guarantee of free speech, association, and assembly is empty if those rights cannot be freely exercised. And where groups are permitted to terrorize those with whom they disagree into forgoing their constitutional rights, the functioning of our democracy demands accountability."

The individuals named in the lawsuit could not immediately be reached for comment. The city of San Marcos declined to comment due to pending litigation.

The confrontation, captured on video in late October, made national news in the days leading up to the 2020 presidential election. It featured at least one minor collision and led to Texas Democrats canceling three scheduled campaign events in Central Texas, citing “safety concerns.” The plaintiffs argue the forced cancellation due to these intimidation tactics also infringed on their First Amendment rights. The FBI continues to investigate the incident, according to a law enforcement official familiar with the investigation.

A group of Trump supporters, who documented their progress on social media, had followed the group throughout the Texas campaign. On Oct. 30, a social media user using the hashtag #TrumpTrainTexas posted on Twitter, “Trolling is FUN.” The user called for other Trump supporters to “escort the Biden [bus] coming through San Antonio.”

Once they left San Antonio, dozens of trucks with Trump and American flags surrounded the bus, shouting and honking at it, and tried to slow it down. The campaign canceled an event in San Marcos and continued on to an event in Austin. But plaintiffs said they struggled to get police to respond as they continued north on Interstate 35.

Many of the defendants who are named in the filing were linked by their social media posts of the incident in which their license plate numbers are visible. According to the filing, the defendants include Hannah Ceh, whose parents Stephen and Randi Ceh are leaders of the New Braunfels Trump Train. The filing states that Hannah posted several videos that showed her license plate number. Eliazar Cisneros, who appeared to participate in the Alamo City Trump Train, also posted videos with his license plate visible, the filing states. The filing also said according to social media posts, Steve and Randi Ceh, the defendant's parents, were also pictured at the U.S. Capitol during the Jan. 6 insurrection.

The provision of the Klan Act that the plaintiffs are citing in the lawsuit has laid dormant for years, but has seen a resurgence under the Trump administration, according to Project Democracy lawyer John Paredes, who is representing some of the plaintiffs. It was also recently cited in a federal lawsuit against Trump after the Jan. 6 insurrection.

In an interview with the Tribune in January after the insurrection, Davis said she saw a direct link between the two events. She also she didn’t think law enforcement had taken the situation on I-35 seriously enough. She said in San Antonio, police responded to a request for assistance, pushing the trucks with Trump flags back. But once they left San Antonio, the caravan once again surrounded the bus. Davis said they called 911 again in San Marcos but they could not get an officer to respond.

“They just kept saying, ‘Where are you now? Where are you now,’” Davis said in January. “We kept giving them landmark after landmark, mile marker after mile marker. … Never were we able to get anyone to come out. It was unbelievable.”

Cervini, who traveling ahead of the bus and had arrived at the event location in San Marcos, said he tried to alert a member of the San Marcos City Marshal's Department that the bus needed assistance, but the individual refused to send help.

A San Marcos spokesperson said in October that police received a call from the Biden campaign bus requesting a police escort but due to traffic weren’t able to catch up to the bus before it exited the city.

According to the filing, the San Marcos Police Department told the plaintiffs on the bus, "they would not respond unless the Biden-Harris Campaign was 'reporting a crime,' explaining: 'we can’t help you.'" the filing reads. "Despite being told the bus was driving through San Marcos, and despite the fact that Plaintiffs had already tried calling 911, an officer from the San Marcos City Marshal’s Department made similar excuses, saying: 'we don’t know if the bus is in our jurisdiction' and 'call 911 if there’s a problem.'"

Lisa Prewitt, a former San Marcos council member who was running for a county commissioner seat at the time, also told the Tribune in the days after the skirmish she had flagged the event to local law enforcement 24 hours in advance and mentioned safety concerns. Prewitt said she had called Stapp and alerted him the bus was 30 minutes away from the event location in San Marcos and was being followed by 50 or more vehicles with Trump flags.

“I let [Stapp] know what was going on and [asked] if we were going to be receiving San Marcos [Police Department] backup, and I was reassured once again that would happen,” she said in October. “We never did see any law enforcement from the county nor the city show up to assist the Biden bus.”

Last year, Stapp denied that Prewitt specifically requested a police escort or mentioned the “Trump Train” was causing issues, but did not respond to follow up questions at the time.

“With the exception of the two phone calls to me from Ms. Prewitt, at no time did anyone from the campaign request assistance from the San Marcos Police Department in advance of the event so that the request could be evaluated and prepared for,” Stapp said in a statement to the Tribune last year.

The incident garnered praise from Republican lawmakers at the time. Trump tweeted a video of the Trump supporters following the Biden bus saying, “I LOVE TEXAS!” and claimed inaccurately that the supporters were “protecting” the bus. Lawyers for the plaintiffs said on Thursday they hope filing this lawsuit will send a message that political intimidation is wrong.

"Whether you're conspiring to harass a campaign bus on the highway or burning crosses in someone's front yard, intimidation of any kind is illegal, and it has consequences," said Emma Hilbert, a lawyer at the Texas Civil Rights Project, which helped file the lawsuit.