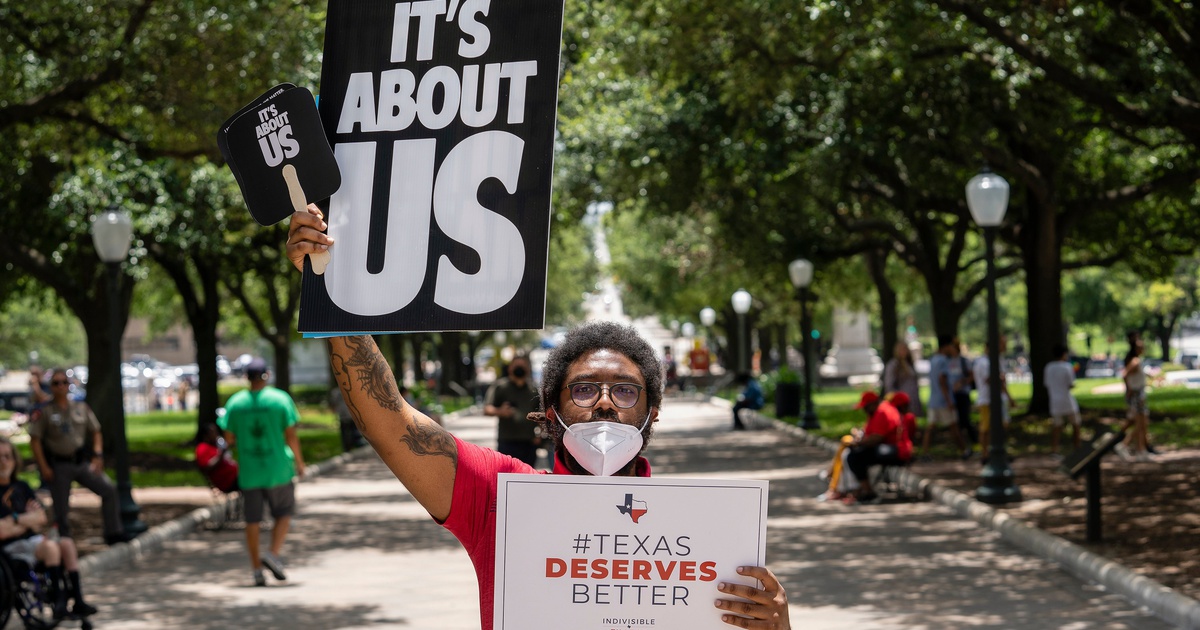 The dramatic exodus of Democratic Texas lawmakers to block a Republican voting bill has choked the political airways in a haze of confusion, posturing and finger-pointing.

But beneath the smoke, a fire rages.

Many Democrats, especially those who are people of color, are incensed, seeing the latest Republican voting bill as another moment of crisis in a state they believe has long marginalized people like them in the halls of power.

Many Republicans, passions stoked by unsubstantiated claims of widespread voting fraud, see their hold on political power slipping away, and are clamoring for a firewall.

The struggle over voting rights in Texas goes beyond the legislative theatrics of the moment. It is fundamentally a clash not just of elected officials, but of the two constituencies they represent. It is a fight over whose voices will be heard that began long before the Democrats shut down the Texas Legislature, and the stakes are not trivial.

The two days preceding the Democratic flight offered a microcosm of the standoff.

As a House committee fast-tracked the GOP's voting bill over the weekend, hundreds of Texans descended on Austin to plead their cases against it. They were left milling in the Capitol's basement corridors for more than 17 hours, waiting for their allotted three minutes to address the House’s committee on constitutional rights and remedies created specifically to consider the special session agenda.

In the end, the committee's Republican majority was unmoved by the testimony of those who waited out the marathon hearing.

The outcome had been preordained by the Republican committee chair at the start of the hearing, nearly 24 hours before testimony ended. Republicans shot down Democratic amendments to ease some of the voting restrictions and rule changes Republicans were seeking, and which the vast majority of those who testified said they opposed. El Paso Democrat Joe Moody petitioned for the panel to hold off on a vote in deference to that testimony and a pledge by state Rep. Andrew Murr, the Republican author of the legislation, to explore some of Democrats’ concerns.

“I think that would show respect for the process we went through and the witnesses that came here — some getting to testify, some not — but also would give us time to give thoughtful public consideration,” Moody told his colleagues on the panel.

Instead, the committee took a roll call, approving the legislation on a party-line vote.

The swift committee passage of a complex, divisive bill further cemented the divide between the Republicans working to secure their grip on power in a state slowly moving away from them and civil rights groups, advocates for voters of color and the Democrats who represent them.

“All of my constituents’ desires were denied,” state Rep. Senfronia Thompson, a Houston Democrat who sits on the committee that considered the voting bill over the weekend, and who on Monday joined the Democrats who flew to Washington.

“Let me tell you why I left,” Thompson said shortly after Democrats landed in D.C., “I left because I’m tired of sitting hostage in a Texas House of Representatives while Republicans strip away the rights of my constituents to vote.”

The legislation at hand would both curb local voting options meant to make it easier to vote and add new steps and requirements to the voting process. It gives partisan poll watchers the ability to move freely in polling places and further clamps down on the state’s strict vote-by-mail rules.

On its face, the legislation could appear to be superficially benign, an effort to cull the state election code for areas where there’s room for improvement. But the Republican proposals have raised the possibility that marginalized voters, for whom access is most diminished when rules are tightened, would bear the brunt of its implementation.

Among its new restrictions are bans on drive-thru and overnight voting that were pioneered by Harris County — the once prized battleground turned Democratic stronghold — to widen access to voters for whom the usual rules limit opportunities to vote. After analyzing their voting data, county election officials found those measures were particularly successful in reaching voters of color in the last election.

The immediate aftermath of House Democrats bolting to Washington D.C. quickly devolved into partisan bickering between those who fled and the Republicans left behind unable to advance their proposals. Republicans, who say their legislation is necessary to protect constituents’ votes from being displaced by fraudulent ones, have accused the Democrats of shirking their responsibilities.

As GOP members prepared to vote to track down the absent Democrats and arrest them if necessary, state Rep. Dustin Burrows, R-Lubbock, called it a “sad commentary” that they would have to use the procedural rule to try to force Democrats to “show up to do the job they were elected to do.”

“Texans expect us to work on important legislation, including improvements to our election code (something we do each and every Session),” Burrows said.

Murr, the voting bill author, indicated he had been “as transparent as possible” in working through the legislation and said he welcomed the opportunity to “continue the debate and work together to pass a strong election integrity bill.” He previously defended the legislation as an attempt to "reduce the likelihood of fraud" — a common refrain among Texas Republicans though they regularly run into the lack of evidence that fraud occurs on a widespread basis.

In the lead up to their quorum break, Democrats appeared frustrated at Republicans’ lack of consideration for the fallout voters of color could face from their proposals. Throughout the legislative debates, they’ve repeatedly pressed GOP bill authors on whether they’ve sought disparate impact studies to assess if their new voting rules would disproportionately harm voters of color. (Republicans have consistently responded they have not.)

But Democrats’ retort since fleeing the state — that their actions are an extreme but necessary effort at safeguarding their own communities from the Republicans in charge of the state — have underlined the reason behind their destination.

Conceding they don’t have the sufficient numbers to block the Texas legislation indefinitely, they have thrust their fight onto the national stage in hopes of helping increase pressure on Congress to pass federal legislation to restore sweeping protections for voters of color.

“Texas’ generations-long pattern of discrimination is not in the past; it is alive and present today in the anti-voter bills before the Texas State Legislature,” state Rep. Trey Martinez Fischer, D-San Antonio, said in a statement about the quorum break. “This is part of a calculated and deliberate Republican plan to chip away at the freedom to vote and to choose our leaders.”

Their remarks echoed the series of federal court rulings in recent years that found state lawmakers have repeatedly and intentionally discriminated against voters of color, often by diluting the power of their votes in selecting their representatives.

The high-stakes fight in Congress centers on a pair of federal bills, including one that could place Texas, and other states with a history of discrimination against voters of color, back under federal supervision of its election laws and redistricting.

For decades, that oversight — known as preclearance — proved to be a powerful mechanism for keeping Texas laws and political maps from going into effect until the Department of Justice or a federal court ensured they wouldn’t undermine the voting rights of people of color.

Before it was wiped out by the U.S. Supreme Court in 2013, preclearance forestalled the adoption of the state’s 2011 redistricting maps before they were revised by the federal courts. It also kept Texas from immediately implementing its stringent voter ID law, which was eventually slightly rewritten as a result of the legal intervention over the way it targeted Hispanic and Black voters who were less likely to have the one of the IDs that were required to cast a ballot.

Texas Democrats have been able to easily align their efforts with calls for the restoration of those protections because they would wholly benefit the voters of color that are in the majority in most of their districts. Republicans’ political base is more likely to be made up of older, white Texans, while Democrats rely on a more diverse electorate with huge vote counts coming in from the state’s urban metros.

Since the current fight over voting rights touched off in earnest at the start of the regular legislative session in January, it’s been clear that GOP proposals would crash up against an emerging Texas electorate that every election welcomes more voters of color and younger voters.

Republicans at one point attempted to regulate the distribution of polling places in the mostly Democratic large counties, using a formula that would have led to significant drops in voting sites in mostly Black or Hispanic areas. Democrats temporarily derailed the GOP's priority voting bill at the end of May in their first quorum break to fight the legislation, an extraordinary measure they saw as justified by the harm they felt their mostly Black and Hispanic constituents would face under the GOP’s voting bill.

When Texas Republicans revived the legislation and worked quickly to advance it just days into a 30-day special legislative session, Democrats saw an existential threat that would curtail the right to vote across the state — and the voices of those they represent.

Vowing to stay out of the state until the end of the special legislative session in early August, the Democrats have set their quorum break as a sort of deadline for Congress to act.

“We are here to fight. We just hope we’re not alone because democracy itself sits at one minute to midnight,” Moody said. “And we need your help to turn back the clock.”

It remains to be seen the extent to which the quorum break will serve as an inflection point in the state’s lengthy roster of fights over voter suppression.

On Tuesday, Democrats were cheered on in their campaign by progressive organizations, labor leaders and civil rights activists who rallied outside the Capitol. Their quorum break was endorsed by groups like the Texas chapter of the League of United Latin American Citizens and the Texas NAACP whose president, Gary Bledsoe, described the quorum break as the “only action available to them to protect people of color from a lower class of citizenship.”

“Significant actions are necessary to protect and preserve our democracy,” Bledsoe said.

While Democrats’ defiance may add some momentum to the national push for federal voting rights reform, it’s unclear that it will change enough minds in Congress to overcome the significant procedural barriers that remain for the legislation in the U.S. Senate. Democrats there lack the votes to do away with the filibuster to bring their voting bills to the floor for a vote.

Back home, the GOP ultimately controls the levers of state government with both the power to call lawmakers back for additional legislative sessions, and the votes to advance the proposals to further tighten the state’s voting rules that Democrats have delayed.

And as recently as this weekend while at a national conservative conference in Texas, Republican state leaders renewed their commitment to doing everything in their power to keep Texas from turning blue.

Those sort of cries weighed on state Sen. José Menéndez, a San Antonio Democrat, as he made the decision to join his House colleagues in D.C. on Tuesday. Though it was largely a symbolic gesture because they lacked the numbers to break quorum, Menéndez was among the nine Senate Democrats who ditched the Capitol as Senate Republicans prepared to sign off on their version of the priority voting bill.

“That's what this is all about. One vote at a time,” Menéndez said. “It just seems like they're just picking on people, and they do it in a very subtle way. It’s almost like [they’re thinking], ‘We’re just gonna shave off a few points. All we need is a few points to stay in power’.”